One of the perks of raising chickens in your backyard is that they are not too picky when it comes to food. They are omnivorous; they can eat most veggies, fruits, seeds, and small animals.

But chickens can’t consume whatever humans are eating. So it makes sense people might wonder if they can consume raw meat. Can chickens eat raw meat? They can, but you shouldn’t feed them raw meat. You should be cooked meat if you want to serve your chicken meat, Why? Please read more…

Chickens can eat animals just fine, they are omnivores after all. You could feed them the leftover meat from your meals and your chickens would be very happy. This also helps clear up some waste.

People think that chickens should not be fed meat since they are birds. Chickens can eat most human food, and meat is no exception. Meat would be a nice treat for your chickens.

However, you should not feed your chickens raw meat since it could contain harmful bacteria or toxins, which is bad even for humans to consume. Go for cooked meat if you want to serve meat to your flock.

Meat is packed with nutrients that are essential to your chickens’ growth and certain functions in chickens’ bodies. Let’s take chicken meat as the example

A high amount of protein

The most notable feature of meat is that it is rich in protein. For cooked chicken, the amount is 38g per 140g, if you go for the breast, it is slightly higher at 37g per 120g.

Protein is one of the most important nutrients in any animal, not just chickens. It can contribute to the growth of eggs and the molting process where they need lots of protein to grow feathers.

It is also important for growing muscle in your chickens. This is one of the reasons why meat is high in protein. Insufficient protein can cause fluid retention or tissue shrinkage.

During the winter months, feeding your chickens meat for protein is especially crucial since there are not many bugs and warms outside for the chickens to find.

Decent amount of other nutrients

For cooked chicken meat, there is a decent amount of nutrients, including vitamin A, calcium, iron, and high amounts of potassium at 307mg per 120 and sodium at 89mg per 120g.

In those vitamins and minerals, there is calcium that helps with bone health and bone development. At a moderate amount, calcium can help prevent osteoporosis in chickens.

Calcium helps with hormone secretion, nerve transmission, muscle function, and vascular function. It is also important for laying hens since it helps form the eggshells. A lack of calcium can result in brittle eggshells.

While meat is a great source of protein for your chickens’ development, you should only feed in moderation since meat also contains some unhealthy substance if consumed too much

Meat contains a decent amount of fat. For cooked chicken meat, the amount is 19g per 120g. If you feed the chickens too much fat, it could lead to obesity.

The amount of cholesterol varies between different types of meat, but it is generally high. For cooked chicken meat, it contains up to 123mg per 140g.

Too much cholesterol is harmful to chickens since it can build up over time inside the blood veins, which limits and even blocks the blood flow.

When the blood flow is blocked from getting to the heart, it can cause heart attacks or angina.

Why raw meat is bad for your chickens

Raw meat can contain harmful bacteria, parasites, or viruses that cause bad digestive problems. Cooked meat eliminates the chance that salmonella can hurt your chickens.

For raw chickens, you may find Salmonella, Campylobacter, Listeria, E.coli, or staphylococcus. Raw pork, campylobacter in the list is replaced with yersinia. For beef, you can find Listeria or Staphylococcus.

If you think frozen meat can kill lots of germs and bacteria in the meat, you are wrong. Frozen meat will only kill those that make the meat spoil, not the microorganisms that make the chickens sick. 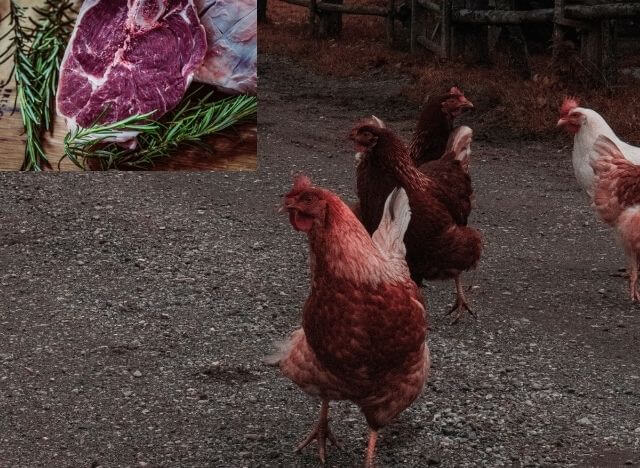 As mentioned, to make the meat safe to eat from those bacteria and viruses, you need to cook the meat to the proper temperature. Here’s the summary from the temperature chart from Food Safety

When cooking, if you want to tell if your meat reaches the recommended temperatures, use a thermometer.

What other form of meat should you avoid?

You have to avoid feeding your flock rotten chicken meat. It could contain mold or bacteria that are bad for your chickens’ health, especially sick or baby chickens.

The frying process adds more fat to the chickens, which is unhealthy for your chickens. Also, there is a chance that fried chickens are high in salt.

So, can chickens eat raw meat? You should not feed your chickens raw meat. Instead, opt for cooked meat if you want to serve your chicken meat.

Meat is nutritious with a high amount of protein and decent amounts of some vitamins and minerals. It would make a nice treat for the chickens, especially during the winter.

However, you should only feed them meat in moderation since it also contains cholesterol and fat.