The Plymouth Rock chicken is an American breed of domestic chicken that was first seen in Massachusetts in the nineteenth century. It is a dual-purpose chicken, raised both for its meat and for its brown eggs. It is resistant to cold, easy to manage, and a good sitter.

The Plymouth Rock chicken was the most widely kept chicken breed in the United States for much of the early twentieth century. The breed was created by crossing two existing strains of chickens, the Barred Plymouth Rock and the White Plymouth Rock. The resulting bird was larger than either of its parents and had barred plumage.

Today, the Plymouth Rock chicken is still a popular breed among farmers and homesteaders. This is due to the breed’s hardiness and egg-laying ability. If you’re looking for a chicken that can withstand colder temperatures and provide you with a steady supply of eggs, then the Plymouth Rock is the perfect breed for you. Keep reading to learn everything you need to know about this iconic American chicken. 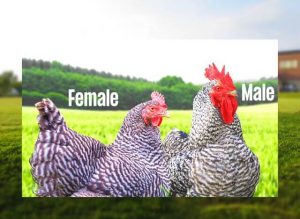 History of the Plymouth Rock Chicken

In 1849, we saw Plymouth Rock for the first time. No one really knows what happened to these original birds since they haven’t been seen in about 20 years.

Around 1869, when Mr. Upham of Worcester, Massachusetts, was breeding barred males and Java hens, the trail gets hot again.

It is said that he tried to breed birds with barred feathers and clean legs.

These birds are now thought to be the most likely ancestors of the Plymouth Rock of today.

The New York Poultry Society wanted to make the Dominique as rose-combed the standard. After 1870, all other birds with a single comb were automatically changed to Plymouth Rocks.

Characteristics of the Plymouth Rock Chicken

The Plymouth Rock chicken is an iconic American breed that is known for how striking it looks. The bird has a single comb with five points, and its comb, wattles, and earlobes are all bright red. The legs are yellow and have no feathers, and the beak is either yellow or a color that looks like horn. The back is long and wide, and the chest isn’t too shallow.

In Australia, there are two different shades of barred: dark barred and light barred. No matter what color or type you choose, the Plymouth Rock chicken will make your flock look beautiful and elegant.

The appearance of Plymouth Rock Chickens

Most people would say that a Plymouth Rock hen’s feathers look like black and white bars, which is true to a certain extent. 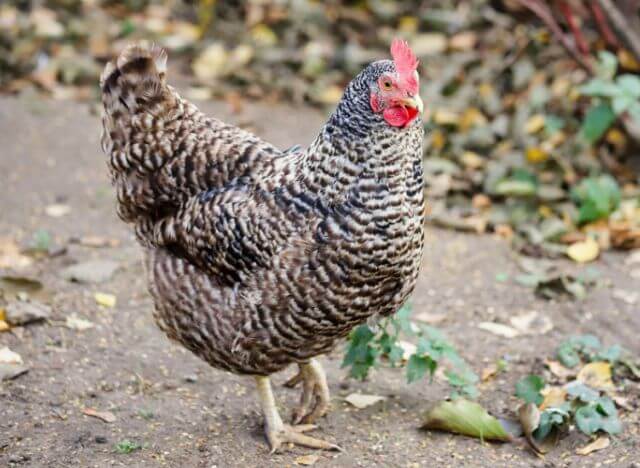 The barring between the sexes is slightly different. The males have equal black and white barring, with each feather ending in a dark tip.

Whereas females have black bars that are slightly wider than the white bars, this can sometimes give them a slightly darker greyish hue than the boys.

As we will see, the Plymouth Rock family has a number of other types.

In fact, it’s probably a symbol of American culture. In this article, we’ll talk about the Plymouth Rock family member who has bars on it.

It has a big, strong body in the shape of a triangle, with a full breast and a long, wide back.

The feathers on the abdomen are full, loose, and very soft.

The barring pattern should be clearly black and white, unlike the Dominique, which is much “fuzzier” and leans toward grey.

Their legs and skin are yellow, and they have four toes on each foot. Their faces, earlobes, combs, and wattles should all be read.

Its beak is the color of a horn, and its eyes are a reddish brown. Lastly, their comb should only have one point and have 5 points.

A normal-sized hen will weigh about 7½lbs, while a rooster can weigh up to 9½lbs.

There is a type called a bantam, and females weigh 2.5 lbs and males weigh 3 lbs.

Aside from its high-quality, dual-purpose production, one of the best things about Plymouth Rock is its personality. These animals are naturally curious, so it won’t take long for them to become your feathered friends.

One of the easiest chicken breeds to raise is the Plymouth Rock. With a little patience, they rarely run away from people, especially those they know. 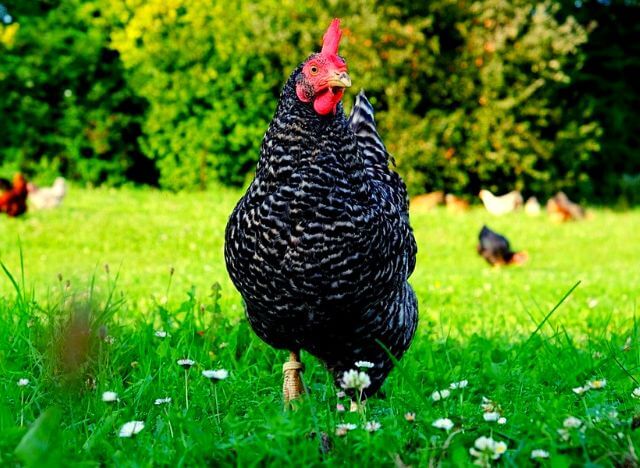 They are a good choice for both adults who are just starting to raise chickens and children in a family because they do well with people of all ages.

Overall, they are sweet and calm, even though they are still pretty active for chickens. They have been known to sit on their owners’ laps, follow them around, and like to be petted and paid attention to.

Plymouth Rock hens usually get pregnant. They aren’t known for being especially moody, but that’s how they tend to be.

If they get broody, they are great mothers, so you won’t have to worry about the chicks. If that doesn’t work, you could always use an incubator.

In a small area or a legalized neighborhood, it is easy to keep a Barred Plymouth Rock chicken without making a fuss.

These chickens don’t fight with other birds in their flock, even if they are a different breed. They definitely love each other and don’t fight.

Overall, Plymouth Rocks are a pleasure to own because they like to be around people more than other breeds and get along well with the other chickens in their flock. Even the roosters have a reputation for being pretty calm.

In general, Plymouth Rock chickens are easy to care for. They can handle both cold and hot weather pretty well.

Even though these birds are very friendly with people they know, they can be very skittish around strangers or other animals near their coop. 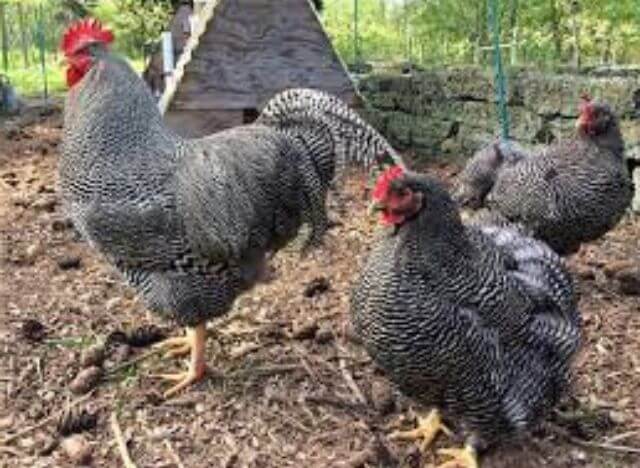 These lovely birds are also in good shape. They tend to get parasites in their intestines, but this is usually easy to treat and even easier to avoid.

Other diseases to look out for are Vent Gleet and Vent Prolapse.

All of these can be fixed if they are caught early enough. If a hen stops laying eggs all of a sudden, check her over carefully to make sure she is healthy.

Plymouth Rock chickens reach adulthood at about the same rate as other domesticated breeds.

Between 18 and 20 weeks, hens can start to lay eggs. Their eggs are soft and light brown, and they are considered “large.”

Each year, a Plymouth hen can lay between 200 and 300 eggs. They lay about 230 eggs a year, on average. You can expect about four eggs a week from these chickens.

Is The Plymouth Rock Chicken Right For You?

This could be your bird if you want a breed that works well in a family setting. Barred Rocks is known for being good with kids and adults alike. They do like to be held and fussed over, and many of them end up on people’s laps. 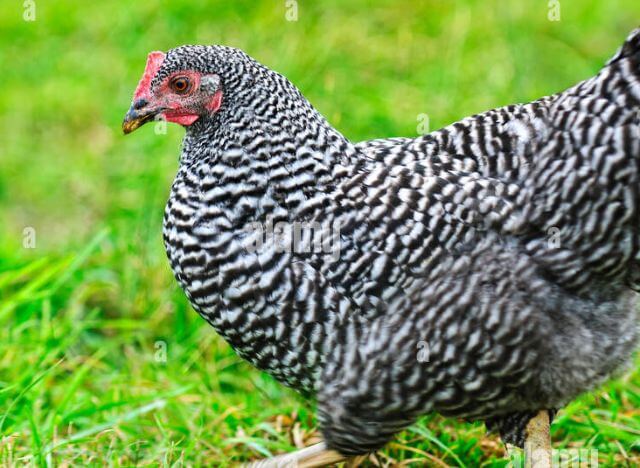 They can’t fly well, so you don’t need a big fence around their enclosure to keep them in. If they can’t walk to the neighbors’ yard, they’re not likely to go check it out.

When it comes to neighbors, people say that the Barred Rock is a quiet but talkative chicken.

The Barred Rock has the same vocabulary as other chickens, including the egg song, but it tends to “whisper” rather than “shout” across the yard. That should make the people next door happy.

They are very calm and easy to take care of, which makes them a good choice for people who have never had chickens before. Plymouth

Even though it would be best if they didn’t have to, rocks are very forgiving of bad management. If you take good care of them, they can almost raise themselves.

Because they are calm, they are also good for 4H projects and exhibitions, where they usually do very well.

At Cackle Hatchery, you can buy Plymouth Rocks for a price that won’t break the bank.

Cackle Hatchery is our favorite and the one we recommend. Most hatcheries have a minimum order of 25 chicks, but Cackle lets you buy as few as three chicks. They also have a high Google rating and have been in business since 1936.

Overall, the Plymouth Rock Chicken is a good choice from almost any point of view. The biggest problem is that the hens can’t keep laying eggs as they age, which is true of most chicken breeds. Aside from that, they are great for beginners, families, and people who live in crowded places because they are friendly and easygoing.

If you care most about how useful they are, you should still be happy with a chicken that can do more than one thing. Plymouth rock chickens have big eggs and almost as much meat as a “unimproved” chicken can give. All things considered, you should give them more than a second look as you start or grow your chicken flock.