Normally, roosters are very friendly. However, in some cases, it represents aggression with other chickens. So, why is my rooster attacking my hens? Let’s see below.

Why is my rooster attacking my hens?

There are many reasons why my rooster is attacking my hens. It sometimes comes from breeding chickens. There are chickens with aggressive genes, so they are ready to fight for anything they don’t like. However, it also can be due to the mating process, characteristics of the rooster or sometimes coop space, diet or boredom.

During the mating process because of the excitement also makes the rooster harm to the hen. However sometimes if you see a rooster that pecks at the hen’s crowing without actually injuring hens while circling it, it can be part of a mating ritual.

Narrow coops and paucity of space also seem another reason for aggressive behavior among roosters. So, an ideally coop should have 5 to 8 square feet per bird is recommended if they are kept in the coop all day

Many roosters tend to become aggressive with other roosters into a flock that already has a head rooster. This will sometimes result in a fight to the death. Sometimes it also happens to hens from time to time when aggressive roosters mistake hens for their opponents.

Many researchers said that Bare and wired coop flooring are able to hurt the sensitive feet of the chicken. This can also induce aggressive behavior.

An inadequate diet can also be another reason for biting among chickens. Besides, insufficient salt intake also prompts aggressiveness among roosters.

Some roosters become more aggressive when they are bored. Therefore, arrange bales of hay with different levels to create a playground for hens and roosters. This will keep them busier, and reduce psychological instability.

How to avoid rooster attacks hens?

If you want to avoid an aggressive rooster go for breeds described as ‘docile’ such as the Austrolorp. A docile breed sometimes is no guarantee though, so you need to assess the temperament of them before you buy.

The chances are, if you select a docile breed, you will never have to face a problematic rooster. Given the reduced stress, also aggression in flocks with gentlemanly roosters it is well worth considering having more than a few hens.

In some cases, it may be obvious that your rooster is attacking hens largely out of fear. He can run away from hens then attack when hens return. So, you need to help tame him, while still showing him who the boss is. Moreover, You can raise a rooster yourself, which help you a chance to tame it, practice to avoid the fear of aggression, and assert its dominance.

What are the reasons you should keep the Roosters inflow?

There are many reasons to keep minimize one Rooster in the flow:

You can breed your own hens:

The most important reason for keeping a rooster is to breed with your own hens. Besides, the Rooster also helps to hatch and to raise chicks together with hens.

The Rooster will break up fights between hens and prevent bullying. This also shows when Roosters are in a flock, it will better connect with hens and reduce aggression of them in flocks. 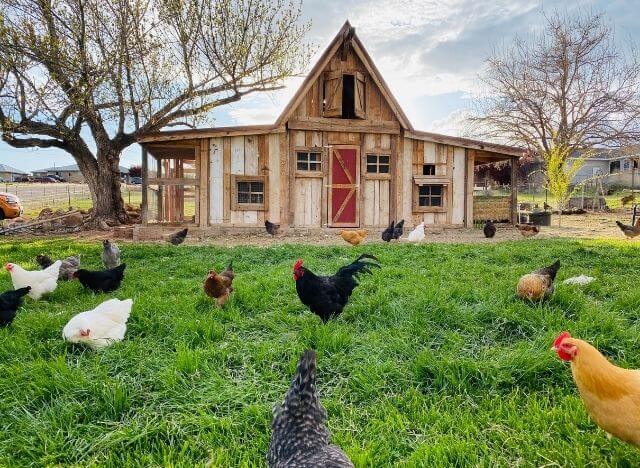 A rooster will usually look for food for his hens, when he finds some he will call hens over and draw their attention to it by repeatedly picking it up in his beak, then dropping it on the ground.

A rooster will remain vigilant for predators and ready to make an alarm call when he realizes a threat from the air or the ground.

He may also provide some physical protection from smaller predators by working with other birds in the flock to deter and punish predators.

The biggest impact of the previous three points is reduced stress in the flock. Chickens naturally live in a flock with hens and one rooster. This rooster’s job is to take care of them; sharing food; keeping the peace, and also protecting them from predators.

Studies have also found a significant reduction in fear reactions of chickens in flocks with a rooster.

What are other disadvantages of Rooster?

For some folk, the crowing of a rooster is an interesting sound, but sometimes it may also be a big disadvantage, especially when you or your neighbors are working overtime and do not want to get up early.

A more enthusiastic rooster can be undeterred, crowing at 2 am or 3 am no matter how dark it is. In this situation, you could try soundproofing or a different rooster.

This is more likely to be a problem if you have less than 5 hens, sometimes a rooster will mate with hens so often he injures them, or causes them to develop bald patches on their backs.

In this case, you can buy protective ‘saddles’ for your hens to wear during the breeding season if this becomes a problem. However, to prevent this, using docile breeds is necessary.

There are many reasons why my rooster is attacking my hens. It can come from breeding chickens, arousal in the mating, leadership style, coop space, or coop flooring.

Besides, you should notice methods such as select breeds described as ‘docile’, and keep calm during contact with them.

Furthermore, you also need to consider other advantages and disadvantages of rooster characteristics to protect better.