Chickens, along with other poultry animals like turkeys, ducks, geese, etc., are animals from the bird family group. The main difference is that they are really bad at flying, they can only flap their wings and lift themselves to certain heights.

However, chickens do keep some of the traits of many birds, many of which are the traits that help the birds fly well. One of the properties that people wonder about is the hollow bones for better lifting. So are chickens’ bones hollow?

Some of the chickens’ bones are hollow, they are not completely hollow though. And the insides of the bones are filled with fluid and air. All of this supposedly helps the chickens fly better. 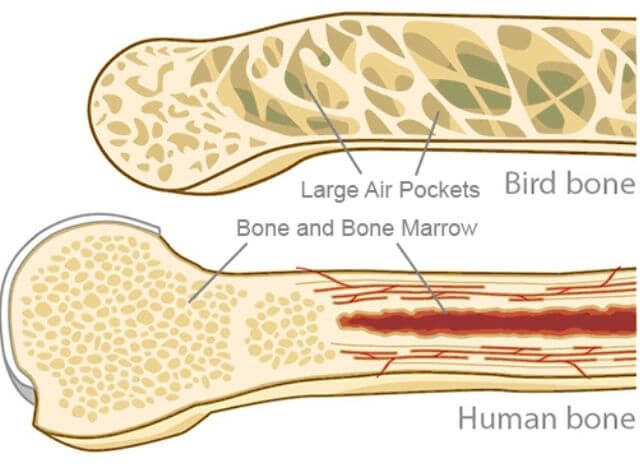 Just like any other vertebrates, the skeletal system acts like a framework that can support and protect the remainder of the systems, the organs, and the tissues that create the body of a chicken.

Over time, the bird bones that are similar to those found on other animals have evolved to suit the needs of flying birds. And some of those changes are kept in the chickens even though they are not good at flying.

The changes that happened in the chicken bones in general include (keep in mind that not all of them will remain their function when they happen with the chicken bodies):

Another modification that evolution did to the bird is the long necks found on most birds. The advantages of a long neck include:

Read more: Why do chickens have wings?

Why are chickens’ bones hollow?

The system helps the chicken take in oxygen whether it is breathing in or breathing out, which makes the body receive more oxygen for more energy for flying.

This is counter-intuitive to think about, but hollow bones don’t make the chicken’s weight lighter. Researchers have discovered that the hollow bones of the birds are heavier compared to those of similarly-sized animals.

The chicken’s bones are denser than similarly-sized bones of other animals. The denser bones don’t make the chicken’s body lighter, but rather make the thin and hollow bones stronger and stiffer to prevent them from breaking.

Do all birds have hollow bones?

There are many birds that have hollow bones, like the chickadees or the Sandhill Cranes. And not every bone in those birds is hollow.

The number of hollow bones in those species varies mainly depending on their habits. Birds that glide and soar often tend to have more hollow bones, while those who often dive may have less.

Some birds don’t have hollow bones, such as penguins, puffins, or loons. Solid bones are thought to help them dive easier and better.

Some birds can have hollow bones even if they don’t fly at all, for example, ostriches and emus with hollow femurs. People think that the air sac system extending down to their upper legs is used to decrease the body heat when panting.

Hollow bones can also be found around humans’ sinuses and in the skulls of many crocodiles and mammals.

How do chickens replace their feathers to fly?

Constant use and exposure to many factors will eventually lead to the chickens’ feathers losing, even though chickens don’t usually fly very high for very long at all.

Chickens replace their feather through a process called molting. Molting takes up a lot of energy, so the chickens will do it when they are doing any activities that don’t require high energy, such as nesting.

So, are chickens’ bones hollow? Chickens have hollow bones in certain places. They inherited this property by being bird-type animals even though they can’t fly very high for very long.

The hollow bones are beneficial to flying in many ways: first, the inside of them are filled with fluid and air connected to the air sacs to provide more oxygen for more energy for flying.

Secondly, they are denser than normal bones to increase structural integrity to prevent them from breaking easily.