Chicken is a relatively easy animal to raise and keep. They are not picky about food and will eat pretty much even most human food you feed them. But, a backyard with chickens only would be boring to some people.

That’s why people want to raise chickens with other animals since you can save some bucks with certain combinations. But not every combination will work. So will the chicken-duck pair do the job?

Can ducks and chickens live together?

Chickens can live with ducks, you can definitely raise them together. But the nature of raising 2 different types of animals means you will need to pay attention and deal with the difference between 2 species.

If you are considering adding another animal to your chicken farm, the duck would be a great choice. Ducks lay just as regularly as chickens, their eggs are great for baking. And unlike chickens, they don’t need too much space and don’t make as much noise.

You may also like: Can turkeys and chickens live together?

But, ducks are not chickens, so they will have differences in many aspects like habit, physical abilities, and more. So what do you need to pay attention to when keeping 2 types of animals together?

Also unlike chickens, ducks tend to splash when dipping their bills in the water. They may get into the hotel and try to swim, which may add dirt and feed to the water.

Duck don’t really need a pool as long as they can fiddle with a deep water dish, but it would be great if they have a little kiddie pool to splash and less likely to swim in a water bowl.

For chickens, will likely stay away from the pool, or may drink some water from it. You don’t have to worry too much since while they can’t swim very well, they can float for a while, enough for you to rescue it.

Your chicken could stand in shallow water to cool itself off on a hot day. But you should supervise it, and keep the deep water away from baby chicks.

Generally, chickens and ducks can share the same quality layer feed, but ducklings will need extra niacin. You can fulfill this need by mixing brewer’s yeast into the feed.

Also, the ducks’ bills are larger than chickens’ beak, so open bowls are recommended. They both love mealworms and table scraps like veggies and bread as well, though ducks seem to be a bit pickier.

At night, chickens like to roost and perch off the ground, while ducks like to nest at ground level. So make sure to get your ducks quiet places to nest, don’t pick places right underneath the perches or the ducks would be pooped on all night.

The ramp should be not too steep since while chickens can navigate the steep ramp just fine, ducks aren’t good at jumping and their feet aren’t the greatest landing tool of them.

Unlike chickens, ducks like to sleep in the open air, so get them a coop with an open door that would lead to a secure small open run. Make sure they are secure enough since predators are still threats at night. 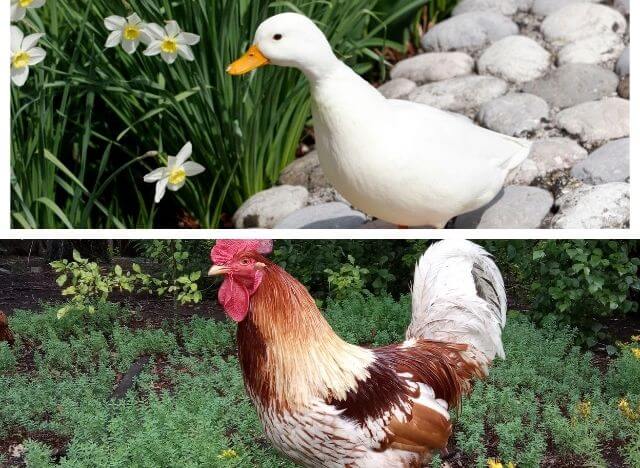 They can get along well

That means the ducks and chickens will likely mind their own businesses. They might hang out together if the flocks are small enough, and no flock seemingly dominates the other one.

A group of female individuals will get along quite well, but a drake (male duck) or a rooster in the flock can change the flock dynamics a bit. The male individuals can potentially chase other individuals away to make sure their females get the best treatment, it is their natural acts and depends on the personalities of the males.

Another natural act of the males is mating. And for Drake, pay more attention. During the breeding season, you should get your drakes 2 to 3 females per drakes to keep them occupied.

You really don’t want Drake’s mating instinct to burst and them mating with your chickens since drakes have the external phallus, unlike roosters, and hens are not designed to be mating that way with the duck. They can be potentially hurt or even killed by an overzealous drake.

To solve this, you should get the hens a rooster to protect them (and also to mate the right way) or you can keep your eye on the drakes themselves so that when they act, you are there to stop them. This isn’t the most ideal solution though.

So, can chickens and ducks live together? They totally can. A flock of duck added to your farm could bring many nice benefits. But, it also poses many differences between species that you need to take care of, luckily there aren’t too many.

For water, chickens only need shallow water to drink, while ducks need deep water to dip the whole heads in to clean and mix water with food for better digestion. They also need water for cooling on a hot day.

For housing, get your ducks’ nesting places, and perches for the chickens. And don’t get a steep ramp or your ducks may have trouble getting back to the coop.