If you think chickens can’t fly, you are wrong as they are pretty capable. Although they can’t fly as high or as long as many other birds, the capability is still enough for them to escape your coop if it has low fences.

To prevent the chickens from flying away, many people have decided to have the chickens’ wings clipped, but how effective is it? Does it hurt?

How high can chickens fly with clipped wings?

Although you cut the chickens’ wings, they can still fly decently. They are clever creatures and can adapt to their new condition just like humans can; that also includes newly shortened wings.

You can make it harder for the chickens to adapt by first clipping one wing first, waiting until they are fully adapted to flying with 1 wing, and then clipping the remaining wing so they have to start over.

Why do you want to clip the chickens’ wings? 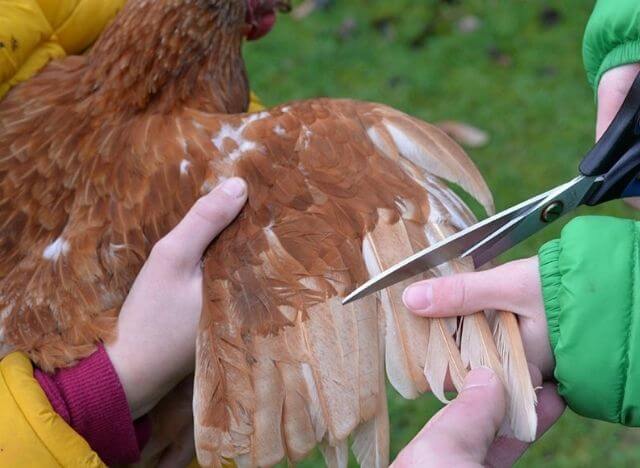 Despite not flying too often, the chickens’ ability to fly is very useful. It lets them flee when predators attack in the wild and allows them to access places like food sources or territories they can’t access without going higher.

Those benefits in the wild turn to drawbacks when owning a chicken as a pet. With normal wings and depending on the breeds, chickens can fly up to 6 feet high, which is high enough to fly over fences to escape your backyard or garden.

An escaped chicken is bad for multiple reasons. The first obvious one is you just lost a pet; the second is they may not survive for long outside as it isn’t the same as a wild chicken. They may get hit by cars or eaten by wild animals.

Read more: Can a chicken lay 2 eggs a day?

What to look for when clipping a chicken’s wings?

So, to prevent the chickens from encountering bad situations outside in the wild, you can clip their wings, 1 wing or 2 wings, to limit their flying ability.

Do the chickens hurt when their wings are clipped? They won’t since you won’t cut to its flesh. The feathers are what you want to take a look at and clip.

When clipping a chicken’s wings, you will want to remove the primary feathers only, and the secondary or covert feathers intact. If you look at it differently, it is just like humans cutting their hair, which is not dangerous.

However, don’t try to rush out and clip your chicken’s wings right away; you should wait until your chicken is about to clear your fences when it’s in flight.

When you cut the chicken’s wings, the younger it is, the better they can adapt and work out some strategies to get around the constraint of having clipped main feathers.

So, to make it harder for your chickens to adapt, wait until they’ve learned to fly with the primary feathers still intact. When they lose them, it will be much harder for them to adapt.

This is because they have developed the skill to fly and will struggle with the new situation.

Keep in mind that just like human hair, the chickens’ feathers will likely re-grow when they start the molting process, the good news is that this job won’t take very long.

All you have to do is have someone hold the chicken. Then gently spread out its wings, locate the main feathers (they are just below the covert feathers), and use something like scissors to cut them.

Should you clip 1 wing or 2 wings?

Clipping just 1 wing is supposedly better than clipping both wings since one wing not working and one does is more confusing for the chicken than having both wings clipped.

This is just the rule of symmetry. Animals in general are symmetrical, and that is for a good reason. It enables you to move straight and distribute your weight equally so that you don’t just tip over.

Plus, as mentioned, if they somehow adapted to this state, you can further mess up their ability to fly by clipping the remaining wing.

Is there any danger when clipping chickens’ wings?

Before clipping your chickens’ wings, bear in mind that you will take away its advantages

With the clipped wings, it will be much harder for them to defend against predators, whether attacking or fleeing. If there are many predators around your place, then you should consider some measures to protect your chickens.

Clipped wings don’t just mean harder to fly. It also means they may find it more difficult when positioning themselves for roosting. In that case, get them a ladder or a ramp so they can access their old spots like before.

So, how high can chickens fly with clipped wings? With both wings clipped properly, chickens are expected to not fly more than 24 inches.

While it sounds painful, the clipping process won’t hurt the chickens at all since you are only going to cut their main feather used for flying.

To make it hard for the chickens, you can clip only 1 wing first and 1 for later if the chickens adapt.