One of the upsides when raising your chickens is that they are not picky about their feed. They are omnivores, and they can eat most veggies, fruits, seeds, some small animals, even some hard things like eggshells.

But, they have their limitations. Chickens can’t eat every human food, so people wonder what they can feed their flock, and spaghetti is one of them. Can chickens eat spaghetti? They can, although spaghetti doesn’t offer much.

How is spaghetti made?

Spaghetti is a staple Italian cuisine that is made of milled wheat and water. Sometimes the spaghetti can be enriched with vitamins and minerals since spaghetti doesn’t offer many nutrients.

With Italian spaghetti, the ingredient used is durum wheat semolina. The spaghetti color is usually white because of the refined flour, but whole wheat flour can be added if desired.

The spaghetti can be bought at most stores in dried form. It is cooked through baking or boiling. When eating spaghetti, people usually add tomato sauce and some meat and vegetables to go along with the pasta.

Chickens can eat spaghetti or any type of pasta and noodles, they enjoy pecking it. However, you should not feed them too much spaghetti since it is high in carbohydrates but low in protein, it is not an ideal chicken food.

Furthermore, spaghetti is not particularly high in nutrients, so you should never feed spaghetti to your chickens as a sole ingredient in their main feed.

If your area allows feeding chickens kitchen scraps, you can feed your chickens any spaghetti leftovers. But, you need to consider the ingredients you used when making the spaghetti and how they affect the chickens.

For example, if there are lots of healthy and safe veggies in the spaghetti, then the chickens can enjoy it. However, some spaghetti may not be healthy for the chickens since it often contains lots of salt.

Moreover, if there is garlic or onion in the spaghetti, you should not serve that pasta to your flock since they can change the eggs’ taste. If the amount is too much, it may harm the chickens’ digestive system.

Also, spaghetti softens as it is cooked since it absorbs the water. And soft food is not ideal for chickens if there is too much.

Is spaghetti healthy for chickens? 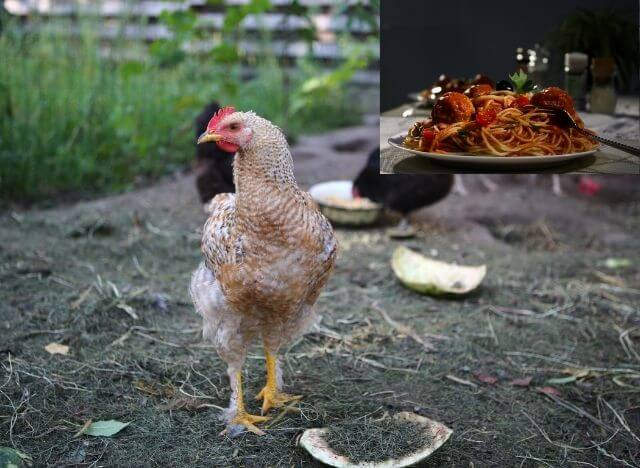 Spaghetti doesn’t have many nutrients for chickens – Image Credit by Olga Kononenko on Unsplash.com

Spaghetti mostly consists of carbohydrates as starch. Depending on the type of spaghetti, the amount of protein may vary but generally, there isn’t too much.

There are also some other nutrients at a low amount like iron, manganese potassium, some B vitamins, dietary fiber,… Spaghetti made from whole wheat grain will have more dietary fiber than those made from degermed flour.

Carbohydrates consist of sugars, starches, and crude fiber – cellulose. Cellulose is what your chickens can’t utilize effectively since they are insoluble.

Carbohydrates make up a large portion of the chicken diet since they break down to glucose. They act as an energy source for chickens that are cheaper and more efficient in being used as energy than protein.

Chickens only use carbohydrates as an energy source, but they could use some help from manganese and they like wheat. So spaghetti is not bad for your chickens, it doesn’t offer much nutritional value to the chickens.

The typical spaghetti sauce will make you reconsider feeding spaghetti to your chickens unless you are not using it.

When laying hens are fed too much salt (sodium chloride), it can lead to eggshell defects.

The excess salt results in carbon dioxide (CO2) tension reduction and bicarbonate and calcium concentrations around the egg in the shell gland (source).

Too much salt also leads to salt intoxication. Baby chickens are more sensitive to this condition. The consequences can go from water intake increasing and wet litter to more severe clinical signs, and even death.

Excess sugar is not good not only for chickens but also for humans as well since it can cause the chickens to become overweight, which then leads to egg production drops.

The meat and vegetables

Since the spaghetti itself doesn’t have too many nutrients, the nutrients from the spaghetti dish that can benefit your chickens come mostly from the meat and vegetable.

As a result, when serving the chicken spaghetti dishes, you should also consider what meat and vegetables are used. If there is a vegetable that is harmful to chickens, you should remove it from the chickens’ feed.

For the meat, the chickens can eat most meat just fine and meat is a great source of protein for your chickens, so you can include some leftover meat in the spaghetti dish.

Chickens can eat raw pasta without too much trouble, but remember to break up the pasta into smaller pieces. However, it is still recommended that you cook the pasta first; raw or dried pasta is not easy to digest.

Spaghetti contains a large amount of carbohydrates. Carbohydrates make up a large portion of a chicken’s diet and are cheaper and more efficient energy sources than protein.

But, spaghetti doesn’t have much protein and lacks many useful vitamins and minerals. Another reason you need to consider is that the sauce may contain high amounts of salt and sugar, which is bad for chickens.

With that being said, chickens still enjoy spaghetti. When serving spaghetti, you should cook it first, or break it down if you serve it raw.