To backyard owners, chickens are some of the most fun animals to keep and raise. They can provide eggs and bring joy to the owners. They are not fancy about what to eat since they can eat many types of food.

But to some people or the industry, chickens are only for producing meat and eggs, so people don’t think much about the chicken’s intelligence or just assume they are dumb. So are chickens dumb?

While they will never be as good as humans, chickens are quite smart. Their intelligence is comparable to that of an indoor pet like a dog or cat, or even outsmart a human child in certain areas.

The experience of raising and keeping a chicken can be just as good as those for a pet. There are some perks of keeping and raising a chicken over a dog or cat.

Chickens can be just as smart and expressive as pets. However, they are often not given enough chance to show themselves.

In poultry factories, people raise and keep chickens in a constrained space and lighting. Their only job is to produce meat or lay eggs. If they can no longer lay eggs, the hens will end up as meat as well.

Some perks of keeping chicken over dogs or cats

Unlike mammals like dogs or cats, chickens don’t urinate at all. Their feces will be covered with uric acid when exiting through the cloaca.

The waste that comes out of the cloaca is moist chicken poop. It has no bad smell compared to that of dogs or cats where the poop and urine can get very smelly.

Chickens are not picky

While some dogs and cats can be picky about their food by not eating everything, chickens will be happy to peck every last bit of whatever you feed them, even table scrap. And they can eat almost anything that humans can eat.

Why aren’t chicken dumb at all?

There are many signs that show chickens can do certain actions that show their intelligence, that they know what to do when facing certain situations not simply by instinct.

Chickens are inquisitive animals. That partially explains their behavior of preferring to go around in a wide space. They can notice the situation in their surroundings, like whether certain spots have food or pose any danger.

They can further tell other chickens about the food or warn about the potential predators with surprising accuracy. This behavior is very useful in keeping the chicken and its flock safe

Chickens, along with many animals and humans, can show some manipulative or deceptive acts where they will do something to other chickens to benefit themselves.

For example, roosters will sometimes make food call sounds to make the hens nearby come to it. This is also one of the ways that the rooster initiates its mating rituals. The rooster tricks the hens to attract the hens.

Eventually, the hens will sense the “deceptive acts” and stop responding to the crow sound if it happens too often. The hens respond to the rooster’s trick by not following the call.

The above example of deceiving and responding is quite similar to the complex behaviors on higher evolved animals like mammals, primates, or humans.

Chickens can somewhat understand the concept of number and quantity and perform simple arithmetic. For example, if presented with 5 units of food and 4 units of food, the chance they pick the 5-unit food is very high.

Chickens can learn something, develop, and master the skill just as fast or even surpass a young 4-year-old human child. There are certain skills that may take a human child month to learn, but only a short time for the chicken.

Chickens can show self-awareness; they show worries and anticipation for the future. They can also seem to control themselves, the example is they can wait for a bigger reward when presented with a smaller one.

As a result, chickens can show frustration, anxiety, or even stress. Stress is one of the reasons why chickens get aggressive and peck at other chickens in their flocks. So owners should fulfill their basic needs to prevent stress.

Chickens can apparently recognize up to 100 faces. Owners should act nicely to their chickens since they can recognize their faces and whether they have done some bad thing to the chickens. If things go well, they can even show affection to humans. 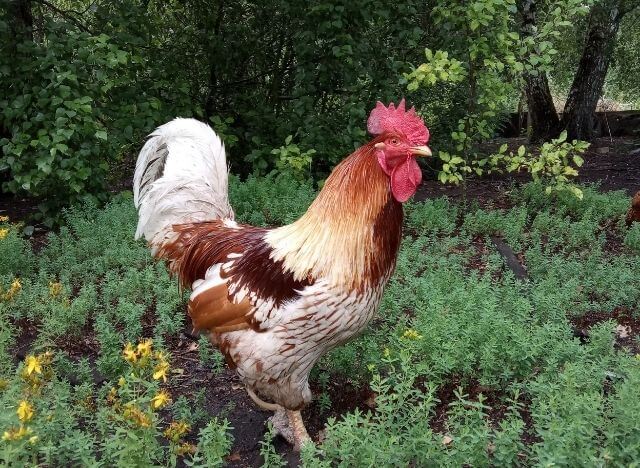 Human interaction is not something the chickens need but would be something that they want after having accustomed to it. When seeing humans, they will want to be petted or even purr like a cat.

The desire for human interaction can also be developed where the chickens aren’t well-treated like a factory farm.

Individual with the flock

Each chicken has its own unique personality. Chickens can recognize the members within their flocks, and whether a chicken is in the flock or not. They can also keep track of the flock’s pecking order.

Based on the chicks’ behaviors, hens can show overprotective acts like covering the chicks with their wings. They may also preen less or walk more when seeing a threat to the chicks.

Chickens can observe what other chickens feel and may act the same. For example, the hens will feel distressed when the chicks feel the same.

There are many signs that show the chickens’ capabilities like deceptive acts, curiosity, arithmetic ability, self-control, recognition, empathy, overprotection, personality, and more.