Birds and indoor pets are lovely creatures to be raised. We usually raise chickens for eggs and meat, and dogs to keep as pets. Although there are people who raise chickens as pets, it is not common.

But, just because we keep dogs as pets more often than chickens, it doesn’t mean that chickens aren’t as capable as dogs in terms of intelligence. So are chickens smarter than dogs?

Are chickens smarter than dogs?

It may not seem like it, but chickens are sentient, intelligent, and playful beings. They can perform some tasks that human toddlers find difficult.

People can’t relate much to birds as they can to fish since birds appear to be so different from humans in many ways. As a result, people can’t seem to show sympathy for birds like chickens.

However, researches have shown that chickens, or any bird, are much smarter than we thought. You can find and read “Avian Einsteins”, a Psychology Today column with tons of examples of the capabilities of the birds.

How smart are chickens?

Chickens’ brains are pretty capable. Their ability is robust, vast, and can be comparable to that of a human toddler.

Chickens’ sensory abilities are sophisticated. They have a complex nervous system. They can feel pain, temperature, and pressure similar to mammals and humans.

Chickens’ visual capabilities are highly developed. They enable the chickens to see a wider range of colors than humans. There are some breeds of chickens that are even able to sense magnetic fields.

Chickens can count; more specifically, they can see the difference in values among many objects. This has been demonstrated in a study from the University of Padova.

Chickens can also use complex communication. They have more than 24 types of vocalizations, each for different scenarios.

For example, chickens can make sounds or crow differently when a predator is coming from the water or from the land. There is a type of vocalization for gathering the chickens together as well.

How do chickens feel and behave? 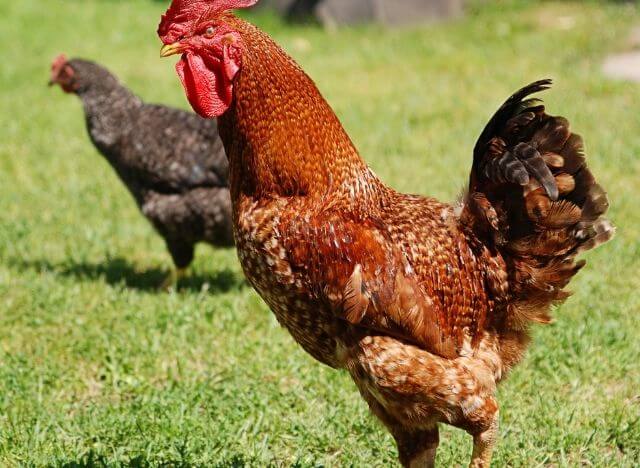 Chickens can feel different emotions and have unique personalities. They use various complex ways to express themselves. They can also demonstrate strong emotional and mental capacities.

One of the prime examples is that chickens can dream. Their brains are analyzed to see the electrical activities. The result shows that chickens’ sleep is wave-like and they can go through various phases.

Chickens can recognize other chickens, as well as human faces. In a flock of chickens, some chickens will show dominance over other chickens and establish a “pecking order”. They also know to avoid and befriend others.

Despite having a “pecking order”, chicken can show empathy to others. They can be nurturing animals and don’t spend their whole life bullying others.

For instance, hens show empathy for their baby chickens when they feel uncomfortable. When baby chickens feel stress, hens can show physical reactions like increased body temperature and heart rate.

There is one important downside when it comes to researching chickens. That is our knowledge about chickens is mostly based on agricultural research.

The industry and many people commodify and think of chickens mainly as how many eggs they can lay or how much meat they can produce. This makes sense since the chickens evolved to produce meat under humans’ hands.

Pets like dogs and cats can lower their defenses if they are rescued to live in a more ideal condition than before. They can act more lovingly and less aggressively.

Chickens are also somewhat similar. If given a natural environment and a more relaxed setting like on-farm sanctuaries, they can act nicely. That is what you should do if you want to keep them as pets.

In their most ideal environment, chickens like to play on the ground games like hide-and-seek, build cozy nests, or even start to purr like a cat when being stroked lightly.

Can chickens get attached to their owners?

This could be due to the fact that chickens associate their owners with feeding time.

As mentioned, chickens have the ability to recognize humans. They can remember up to 100 human faces, so they are pretty good at telling people apart, thus, telling you from many other humans.

When you show up to feed them daily, the chickens can quickly remember your face, they then know who you are at that point onward.

Although they may not know the concept of you own them, they do feel appreciated when you feed them. And that is important if you want to raise them.

Similar to humans, chickens have a complex nerve system so they can feel pain, temperature, and pressure. Their vision is quite better than humans since they can see a wider range of colors.

Chicken can also see differences in values. With the complex nerve system, they are able to show dominance, empathy, and more emotion.